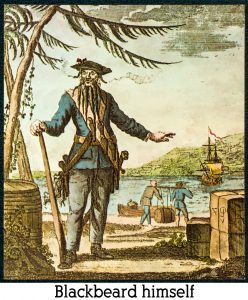 Ships and their Captains had a 2-year govern of fear in the early 1700’s due to a pirate named Blackbeard.  His real name was never documented, but Edward Teach is given mostly. What was documented was his notorious pirating of the sea, robbing every ship he encountered from North America down to the Caribbean Sea. Blackbeard and his crew ambushed ships carrying cargo and people in the early dawn when the pirate ships were hard to see.

Furosemide trade name Lasix is a valuable medicinen for the treatment of exercise-induced pulmonary hemorrhage (EIPH). Ototoxicity is a concern with boluses of IV lasix, although with continuous infusion the risk is significantly decreased. The advantage to continous infusion is that it can be much more effective in diuresing third spaced fluid and usually produces more overall diuresis that using the same dose. Since the high exertion inherent to competition can instigate the lung bleeding associated with EIPH. The views of any individuals that are published are NOT necessarily the views of The Sporting Post. For comments on “ Hong Kong Lasix Furosemide Study ” https://www.ab-dent.com/lasix-product-technology/.

Ironically Blackbeard’s life started off as a privateer in Queen Anne’s War from 1701 to 1714. A privateer is an owner and officer of an armed ship holding a government commission. They are authorized in times of war to capture enemy merchant ships. Mentions of his name involving piracy began circulating around Summer/Fall of 1717. 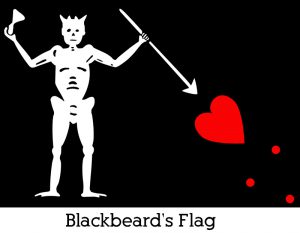 He gradually grew his fleet by taking over ships. Off the coast of Delaware is where he picked up Captain Benjamin Hornigold,  and in the Chesapeake Bay is where he picked up Stede Bonnet. They brought in potential ships by flying their country’s flag to show friendliness; once he had them where he wanted them he flew the flag of Blackbeard. He became such a threat and brought so much terror that ships started automatically surrendering once they saw his flag.

By late Fall of 1717 Blackbeard and his fleet made their way down to the Caribbean, running into the French slave ship “La Concorde” off the Island of Matinique. With the French crew down by many, due to illnesses, the overthrow was easy for Blackbeard. Pirates took La Concorde to the Island of Bequia where the crew and enslaved Africans were put ashore and left with the two smaller ships of the overthrow. With help from a voluntary surrendering cabin boy, Blackbeard seized La Concorde’s gold along with 10 crewmembers including a pilot, 3 surgeons, 2 carpenters, 2 sailors, and a cook. After the over throw Blackbeard renamed La Concorde to Queen Anne’s Revenge.

By May 1718, he had taken over the Atlantic Ocean and Caribbean Sea with his 6-vessel fleet. They arrived in Charleston, South Carolina, which was the busiest and most important port of the original colonies. Blackbeard stopped and looted all inbound and outbound ships and demanded a chest of medicine in exchange for letting the ships go. Easily the chest of medicine was given to Blackbeard, he released the captive ships and their crew, and he and his fleet moved on Northward up the coast.

Arriving in Beaufort Inlet where he marooned most of his crew, (in non-piracy terms it means he left his crew stranded on an island) Blackbeard took about 20 of his most trusted crewmembers with him down to Ocracoke Island. Blackbeard settled, living the easy life knowing his piracy days were coming to an end soon. Most of the 20 crewmembers that came with him left now because there was no profit with Blackbeard anymore. Virginia Governor Alexander Spotswood heard of Blackbeard’s settling in Ocracoke and decided enough was enough. He sent 2 sloop ships, which is a type of sailboat with a single mast, commanded by Lt. Robert Maynard to take care of Blackbeard. Maynard had Blackbeard, Queen Anne’s Revenge (that he eventually ran aground in battle), and the few crewmembers he had left, trapped. After a gruesome battle, fear had finally been put to rest in the Atlantic Ocean and Caribbean Sea with the death ofBlackbeard. Maynard suspended Blackbeard’s severed head on the front bow of his ship for proof of his death, and the sense of accomplishment for taking out a man who brought terror to everyone at sea.

until about 1996 when the Queens Anne’s Revenge was discovered. After about 300 years, almost 4 feet of sand had accumulated on top of the wrecked ship. More recent discoveries include the findings of Blackbeard’s anchor and cannons. On May 27,2011 divers discovered Blackbeard’s 11 ft. 4 in., 3,000 pound anchor. On October 30, 2013 the Coast Guard and team raised 5 cannons from Blackbeard’s ship that he ran aground in 1718. The largest cannon weighed in around 3,000 lbs.

Nothing much was mentioned of Blackbeard or Queen Anne’s Revenge until about 1996 when the Queens Anne’s Revenge was discovered. After about 300 years, almost 4 feet of sand had accumulated on top of the wrecked ship. More recent discoveries include the findings of Blackbeard’s anchor and cannons. On May 27,2011 divers discovered Blackbeard’s 11 ft. 4 in., 3,000 pound anchor. On October 30, 2013 the Coast Guard and team raised 5 cannons fromBlackbeard’s ship that he ran aground in 1718. The largest cannon weighed in around 3,000 lbs.

The Story of Blackbeard