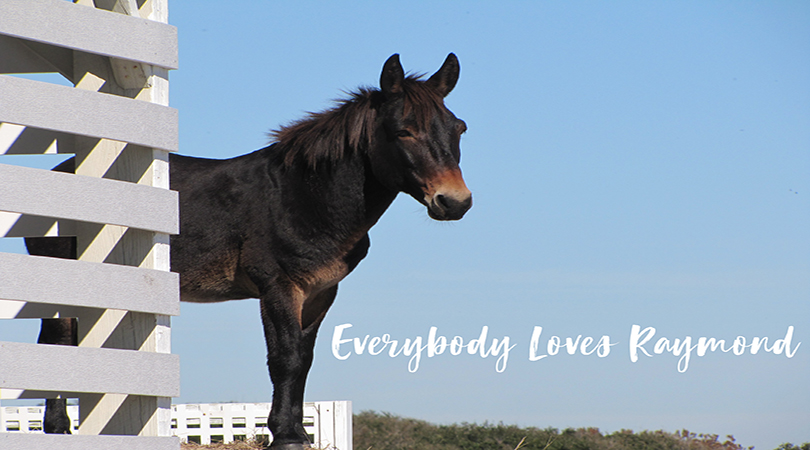 In the very recent past, the 4×4 area of the Currituck Outer Banks was home not just to wild mustangs, but also cattle, goats, and even buffalo. Local farmers let their livestock graze the island and it was not uncommon to come across long-horned steers on the dunes. There were also a few donkeys living among the horses, and they bred with the mares just like the horse stallions did. Fortunately, the offspring on a donkey and a horse is sterile so there was no dilution of the Spanish genetics of the mustangs, but they did produce a few mules over the years.

The last surviving mule is one of the northern beach’s most well-known and well-loved residents – Raymond.

Raymond, now in his early 20s, has been a fixture in Swan Beach his entire life. He has maintained a harem of mares even though he is unable to reproduce and is well-known for his aggressive protection of them. Visitors and residents can often hear Raymond braying in the mornings, letting everyone know that he’s still keeping watch over his little corner of the beach. 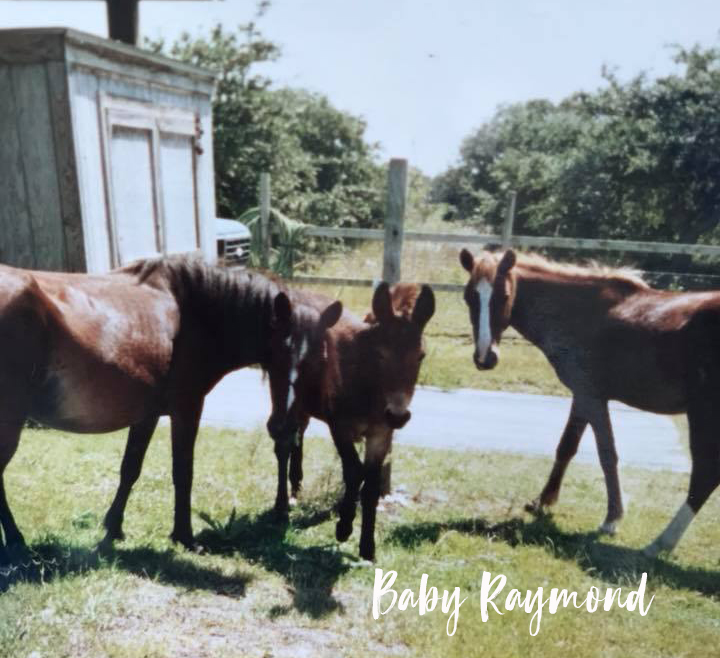 Unfortunately, Raymond has always had chronically bad feet. His toes usually grow long and then break off during the dry summer. The sand normally acts like a natural nail file and helps the horses’ maintain a correct hoof structure, but mules feet tend to be much harder. The Corolla Wild Horse Fund has always kept close tabs on Raymond’s toes and with the guidance of their experienced veterinarian determined that the best course of action over the years was to let his hooves grow and break. While they sometimes got very long, the risks of anesthetizing him outweighed the temporary discomfort Raymond experienced, and for nearly twenty years of his life this cycle of hoof growth continued and did not negatively impact Raymond in the slightest. 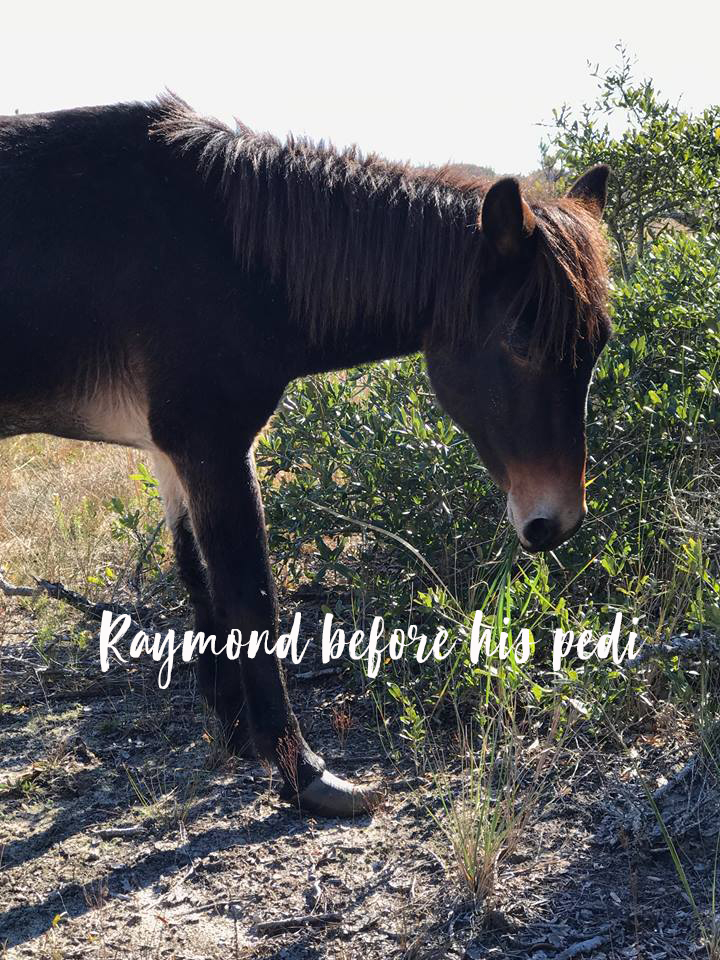 But instead of becoming brittle and breaking off to a more manageable and comfortable length, last year Raymond’s hooves continued to grow through the summer the fall he was displaying behaviors that indicated he was having trouble moving around like normal. Over the summer, Raymond lost all of his mares and had even been seen chasing mares away from him. This was very unusual behavior, and indicated that Raymond was feeling threatened and obviously not in his normal, tip-top shape.

In October, under the guidance of the veterinarian, CWHF decided that it was time to intervene and trim Raymond’s hooves. While the risks were high, it was likely that Raymond would not survive much longer with his feet in their current shape. He was spending equal amounts of time standing and laying down, and was not covering much ground at all. He’d lost weight and it was clear that he was in pain.

Of course, it was then that Raymond decided to disappear into the dense marsh and CWHF staff and volunteers spent over a month trying to locate him.

Finally, on November 20, CWHF’s herd manager found Raymond and immediately began to assemble the team while she stayed with the mule to make sure he didn’t escape into the marsh again. The vet and farrier made the two hour drive up to Corolla, gathered all of the supplies needed for the procedure, and then hit the 4×4. Raymond was anesthetized via dart gun and safely went down in just a couple of minutes. The mule had severe, deep abscesses in both front hooves which were drained and treated with medication. Then all four hooves were trimmed of excess growth and reshaped to help encourage proper structure as they grew back out after the procedure. Raymond was given a dose of painkillers before the sedation was reversed, and he was back on his feet (albeit a bit wobbly!) in no time. 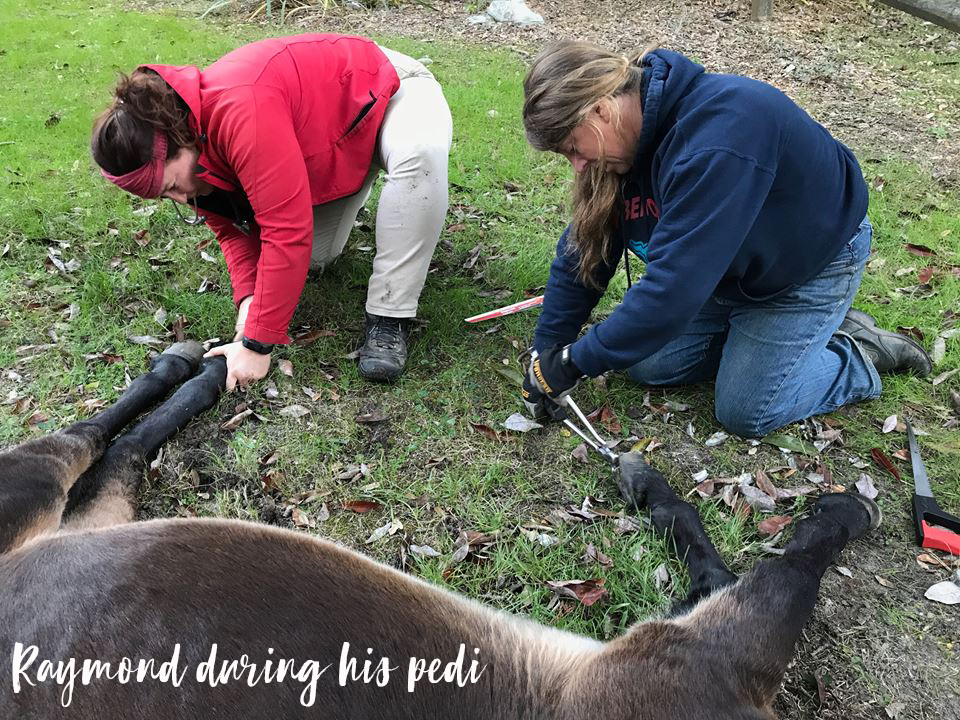 Raymond laid low for almost another whole month, but right before Christmas he was spotted out in the open with a horse friend (a wonderful sign!) and was moving without any limp or stiffness whatsoever. It truly was a miracle. There was a very real concern that Raymond would not survive the procedure and immediate aftermath; most domestic horses would certainly not. But Raymond is a tough, determined old guy and he proved once again how strong his will to live is. 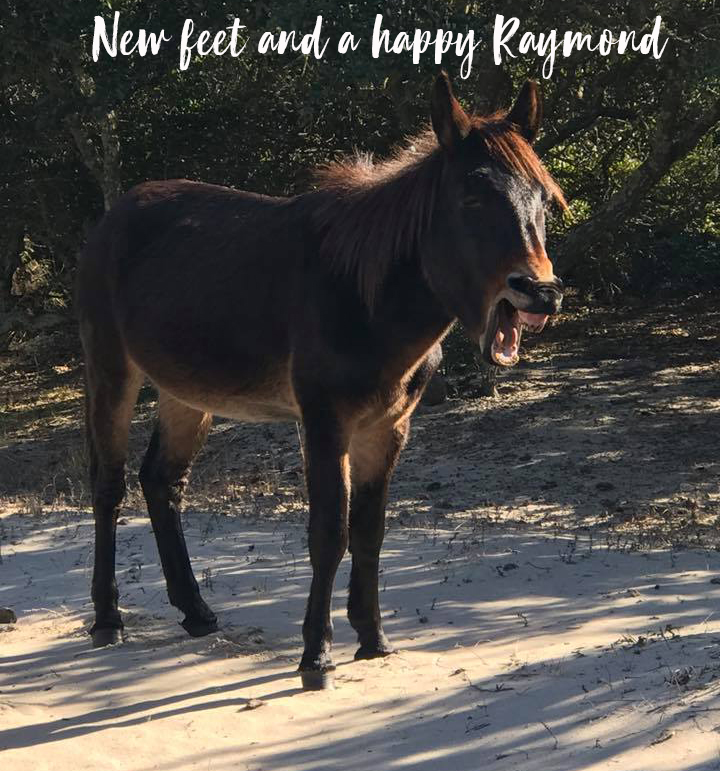 The Corolla Wild Horse Fund is dedicated to protecting and preserving the wild Colonial Spanish mustangs, and Raymond is an extended member of that family. Being able to treat an animal in the field while not having to remove them from the wild is truly a blessing. Raymond’s success story is a testament to his strength, and to the wonderful team of caregivers at CWHF.