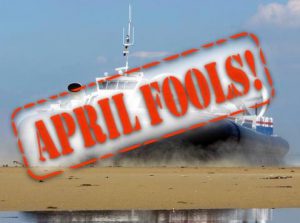 It is a very exciting time for Outer Banks visitors and residents alike.  Yesterday, Tom Jenkins, a spokesperson for the North Carolina Department of Coastal Transportation (NCDOCT) announced a decision has finally been made regarding the much needed alternate route to the northern Outer Banks.  Beginning June 6, 2015, the very first high-speed car-carrying hovercraft ferry service will begin for the Outer Banks.

The decision comes after years of debate and speculation over a potential 7 mile bridge connecting mainland and coastal Currituck county.  Jenkins mentioned several key elements helped the board arrive at their decision.  “The main concern was cost.”  He stated.  “We were able to negotiate a rate with the craft manufacturer so that we could build a fleet sized to meet 150% of the anticipated demand for 75% of the proposed bridge budget…  this will allow us spare units for emergency runs and overflow while keeping the toll rates lower.” 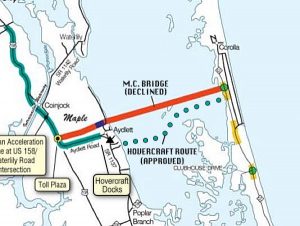 Jenkins also cites that compared to traditional ferries, hovercrafts are a bullet-proof solution for the shallow waters and shifting sandbars in the Currituck Sound.  “Since hovercrafts do not displace water, channel depths are a non-issue.  Our high-speed ferries can stay on a fuel and time efficient route without worrying about getting stuck when running aground.”

How much time will the new hovercrafts cut?  The hovercrafts are powered by twin turbo-prop engines that promise a 12 minute voyage after all vehicles have boarded.  Disembarkation will be equally as expedited.  Plans include a three acre, paved landing zone where vehicles will be offloaded immediately after the hovercrafts come to a complete stop. The vessels will be able to hold a maximum of 35 passenger cars and will include an air conditioned lounge/gift shop.  Toll prices are not yet released but are expected to be below $20 for a two axle vehicle.

Speeding up access to the northern Outer Banks is only one of the potential benefits of this new deal.  Pending public release of the state’s contract terms, the technology could be deemed affordable enough for other area businesses to take advantage of hover technology.  Those currently topping the list in interest are… golf courses.

According to a recent exit survey conducted by the Coastal Carolina Golf Federation, 74% of golfers surveyed in area courses indicated they’d prefer driving over water hazards if they could.  “Hovercarts” are not only green and fairway friendly, they would also provide excellent maneuverability over most bodies of water and are capable of speeds much higher than traditional carts.  This could increase rate-of-play by 30% and turn into more revenue per day for local courses.

Many more details are anticipated in the coming weeks.  Stay tuned to The Outer Banks Current as we’ll keep updating this story as soon as information is released.  For more information regarding the legitimacy, authenticity, and outright truthfulness of this story please read the next sentence.  This story is ninety nine percent satirical.  That remaining one percent is probably that the bridge is really being debated and that hovercrafts are really cool.  We congratulate all who have successfully read this article in it’s entirety.  Making it to the bottom of the page is rare these days and quick-fire social media comments are really the intention of all these posts you’ll read about today.  Heck, you deserve some sort of reward for even clicking on the story and reading it!  I know a place nearby that makes really good cookies but we’ll have to work something out as far as getting it to you.  Here’s one more boring sentence to fill in a paragraph 51% of people will not make it to.  Thanks for stopping by, please share with a friend!

Still in the market for an Outer Banks vacation rental?  Get searching by clicking the button below!