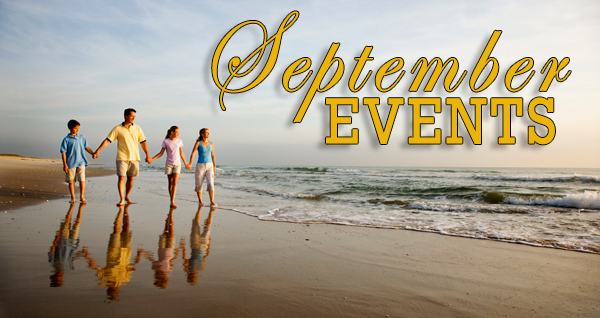 SEPTEMBER 06, 2013
Manteo’s Historic Waterfront, Manteo, NC 27954 – MAP
Shop unique boutiques, browse our galleries! Pick your next great read! Sip a gourmet coffee! Savor a glass of wine! Dine at one of our many wonderful restaurants! Visit our attractions! Discover Manteo on the First Friday of each month, April through December – 4 p.m. to 8 p.m.

SEPTEMBER 02, 2013
The Goodlife Eatery, 3712 N. Croatan Hwy., Kitty Hawk, NC 27949 – MAP
The Christian Music Summer Concert Series begins Monday night Memorial Day, May 27 and runs thru Labor Day Sept 2. Hosted by local artist Kim Kalman, the evening features Christian music. Join us for this family-friendly evening at the Good Life Eatery mp 4.5 in Kitty Hawk on the by-pass at 7pm. Our featured act on May 27 is Kim Kalman who has just released her new CD AT THE FOOT OF THE CROSS. The “love offering” benefits our Beach Food Pantry and Interfaith Community Outreach.

AUGUST 28, 2013 – SEPTEMBER 01, 2013
1701 S. Virginia Dare Trail , Kill Devil Hills, NC 27948 – MAP
Phone: 252-207-9950
Bengt is a former winner of the prestigious San Francisco International Comedy Competition. He has been seen on Late Night with Conan O’Brien, The Late Late Show with Craig Fergusen and Live at Gotham on Comedy Central. He was invited to perform at the Vancouver International Comedy Festival, The Boston Comedy Festival, the Aspen Laff Festival and most recently Gilda’s Laugh Fest in Grand Rapids, Michigan. He has been interviewed about comedy on NPR and PRI and his been quoted in the Washington Post. He’s been a guest on the Bob and Tom Show and all three of his comedy Cd’s can be heard playing on XM Sirius radio. Most people who know him would say Bengt is a logistically impaired ditz, but his comedy is described as intelligent, surprisingly universal considering the content matter and profoundly funny.

AUGUST 29, 2013 – SEPTEMBER 02, 2013
Jennette’s Pier, 7223 So. Virginia Dare Trail, Nags Head, NC 27959
Phone:252-255-1501
Since the beginning Wave Riding Vehicles has stood for surfing and spreading it’s Aloha throughout the world. We continue to support professional surfing in all of its forms. With the new construction of Jennette’s Pier, backed by the North Carolina Aquarium, WRV has the unique opportunity to run one of the most core surf contests in the region. The Wave Riding Vehicles Outer Banks Pro Presented by Hurley with a total purse of $30,000 in prize money looks to be another hit this year! Part of the Western Atlantic Surf Series.

SEPTEMBER 05, 2013
1100 Club Road, Corolla, NC 27927 – MAP
Wine & Swine Outer Banks is set for Thursday, September 5, 2013 from 11:00 a.m. to 7:00 p.m. at the Currituck Heritage Park in Corolla, North Carolina. Families and foodies alike will find a host of offerings designed to tempt every palate. Wine & Swine will feature the very best of Outer Banks BBQ, seafood, and eclectic food offerings; area wine and craft beer; local bands to kick back and relax to or get up and dance the day away; activities for attendees of all ages; and plenty of goodies from area artisans. Admission is free. Food can be purchased from our great vendor partners with wine and beer being available by the glass.

SEPTEMBER 14, 2013 – SEPTEMBER 21, 2013
Nags Head, NC 27954
The ESA, the largest surfing organization in the world, hosts the season’s “grand finale” where the best of the best, national and international surfers go head to head.