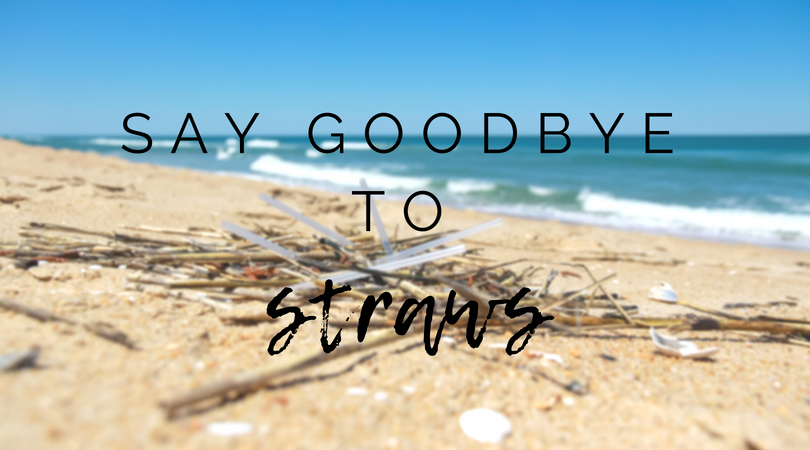 When you take a seat at your favorite Outer Banks restaurant this year, you might notice something missing. Plastic straws along the beach are disappearing—and for good reason. Coastal communities across the U.S. are joining a growing movement to do away with plastic straws. Here on the Outer Banks, that movement is being spearheaded by one of our local nonprofits—Network for Endangered Sea Turtles or N.E.S.T.

While these simple plastic tubes seem harmless enough, their danger is in large part thanks to their ubiquity. With the average American using 1.6 straws every day, the numbers add up. An estimated 500 million plastic straws are thrown away each day in the U.S. alone. And while that number might not be so bad if all waste ended up in landfills and broke down in a timely manner, that’s not the case. As living in a coastal community makes all too apparent, trash isn’t contained in landfills and instead finds its way into our oceans and eventually onto our shores.

They’re not just an eyesore, however, straws pose a serious threat to Outer Banks wildlife. The Outer Banks is home to several varieties of sea turtle species, including Loggerhead and Green sea turtles. As a popular nesting ground for these gentle creatures, having straws in our waters can seriously do some harm. Straws’ long, thin design makes them easily ingested by sea life, especially sea turtles who may see the straws floating and mistake them for food. Sea turtles can even get plastic straws stuck in their nostrils, blocking their airways. And since straws don’t break down easily, there’s nothing the turtle can do to remove it without human intervention.

Thankfully, intact straws haven’t been a huge problem for the turtles rescued by N.E.S.T. recently. There is another threat that plastic straws contribute to, however: microplastics. These small kernels of plastic are less than five millimeters long (roughly the size of a sesame seed) and come from many different sources, such as larger plastics that have broken down. Even though turtles might be able to avoid ingesting straws, microplastics are harder to avoid.

Of course, straws aren’t the only contribution to ocean pollution. Single-use plastics of all kinds are some of the biggest offenders threatening our oceans with straws listed as one of the most common types of waste threatening this ecosystem today. Straws position amongst the top 10 items found during beach cleanups means that they’re also accessible when it comes to reducing the amount that ends up in landfills and eventually on our beaches.

Ultimately, an ocean without any plastic is ideal, and in the meantime, local restaurants, shops, and activists are taking a step in that direction by saying no to straws. Outer Banks Brewing Station hasn’t offered plastic straws in years and now more establishments are following suit. After North Carolina’s repeal of the plastic bag ban on the beach, businesses are finding alternative ways to reduce waste. An easy step in the right direction for many restaurant owners is saying goodbye to plastic straws.

A restaurant handing out a straw per drink isn’t uncommon but Outer Banks restaurants are adding their names to a growing list finding alternatives to the compulsory plastic straw. Now when you walk into some of your favorite haunts like Bad Bean and Front Porch Cafe, don’t be surprised when straws aren’t offered. 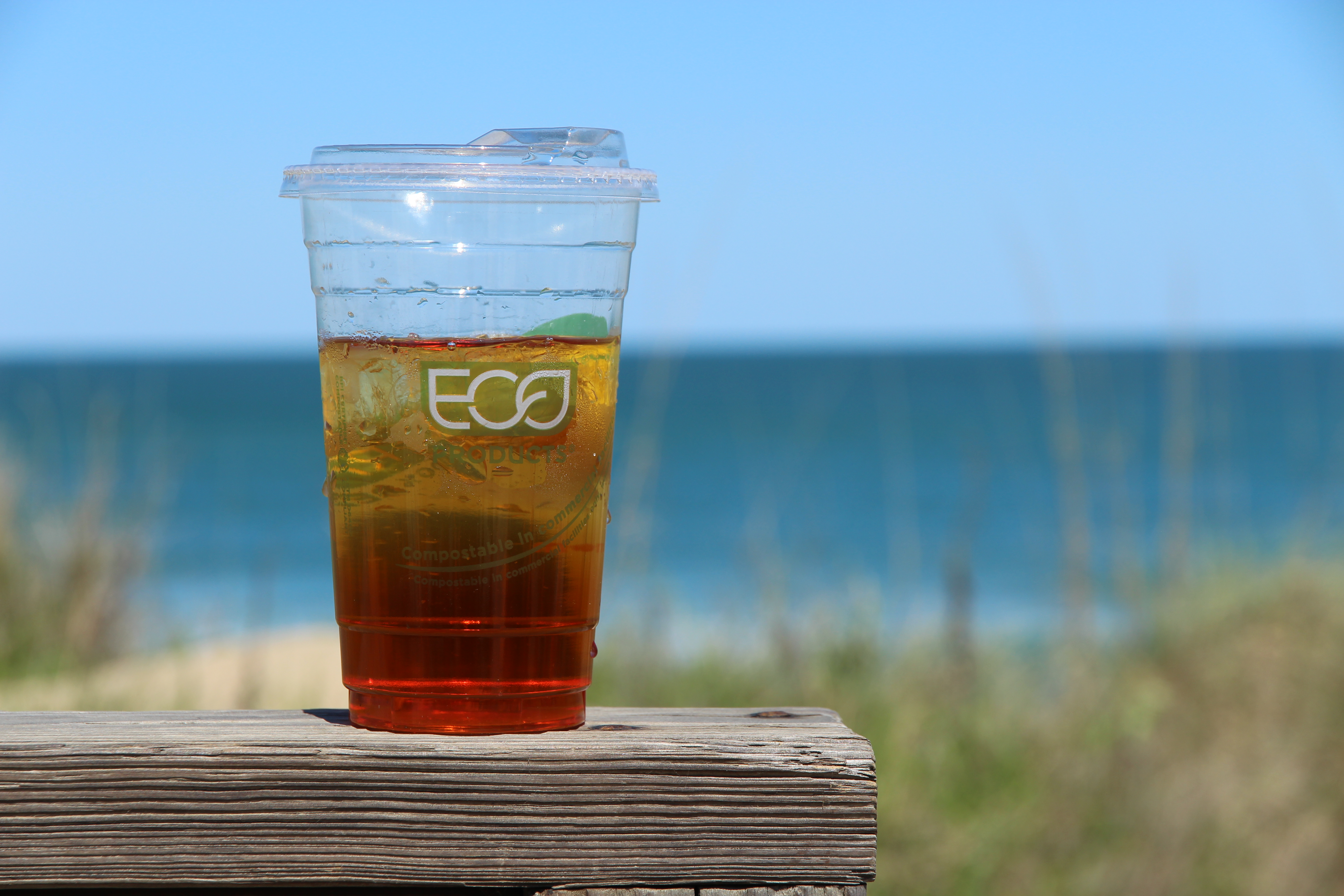 Many businesses are introducing environmentally friendly replacements. Coastal Provisions in Southern Shores opted to try a new to go cup design that doesn’t require a straw and will melt upon contact with hot liquids. That’s not to say that straws are nowhere to be found. Many participating restaurants offer either plastic or paper straws upon request. Front Porch Cafe took their commitment further and swapped their plastic straws for paper at all three of their locations in Kill Devil Hills, Nags Head, and Manteo. This is just the latest in their efforts to minimize the impact of single-use plastic waste—they already offer a discount for customers who opt to bring in a reusable coffee mug.

Efforts to rid the beach of straws aren’t limited to restaurants; however, retailers are joining the movement as well. ALTWOOD, a home and lifestyle store in Historic Corolla, offers reusable alternatives like prismatic glass and all-natural bamboo straws. Reusable straws such as these are an ideal alternative for people who are uncomfortable putting their lips directly to drinks for sensory and sanitary concerns.

Shoutout to @shopaltwood for offering some of our favorite products locally and for being wonderful in general! 💙💙Plastic straws are one of the most commonly found single use items, they’re some of the most damaging, and they’re one of the easiest to give up! I personally love using a straw so glass, bamboo, or stainless steel reusables are perfect! And @strawsleeves are a great way to keep them with you without them getting grungy #shoplocal #supportlocalbusiness #shopobx #shoplocalobx #shopaltwood #stopsucking #skipthestraw

Offering paper straws “can be a win, win situation for the restaurants and the sea turtles,” believes Dennis Pohl, President of N.E.S.T. Not only does switching to paper straws upon request reduce restaurants’ costs but it also equates to less plastic in our oceans.

Protecting our beaches takes more than a handful of restaurants getting rid of plastic straws—it requires community involvement. You can make your Outer Banks vacation eco-friendly beyond the dinner table. With plastic bags offered in stores again, help keep your happy place clean and picturesque by opting for paper bags or even better, bring your own reusable ones. And the next time you aren’t given a straw, remember the turtles. Bringing reusable straws while you vacation in your Outer Banks vacation rental will help keep the sea turtles safe.

If you’d like to help N.E.S.T. save the turtles, you can donate to their efforts on their site. 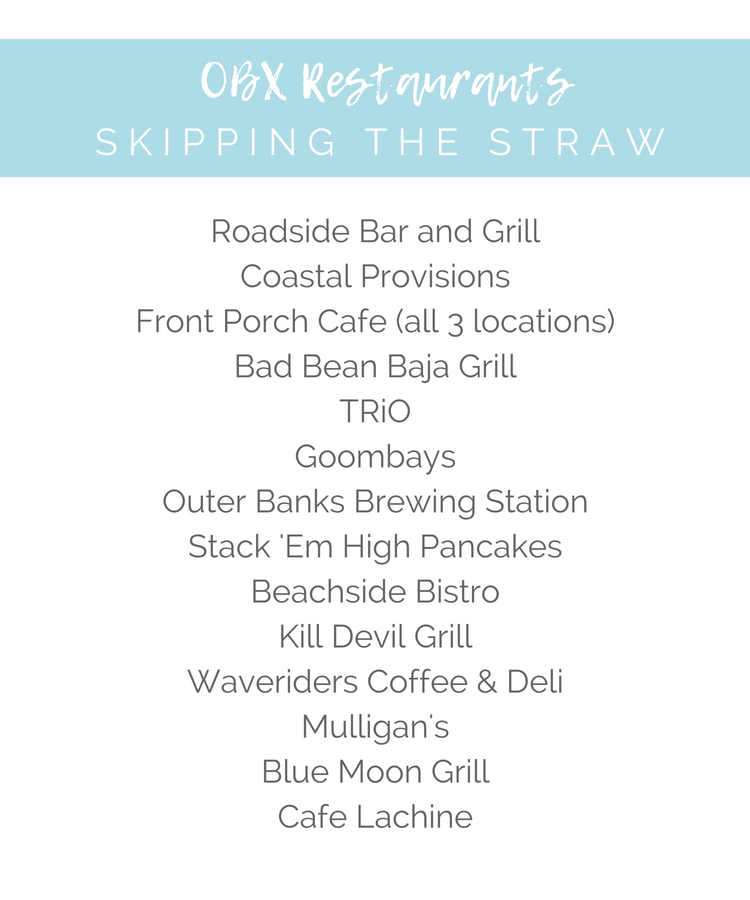