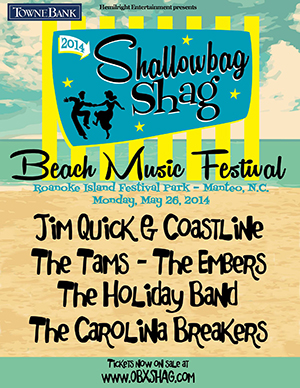 Tickets are available online. There is a general admission lawn seat ticket for $25 and also a VIP ticket for $60. The VIP ticket includes preferred parking on the island, VIP seating in front of the stage with a chair provided, and a festival bag. There is also the option to rent a tent for $125. With this deal your 12′ x 12′ tent will be set up on the back lawn with 4 beach chairs provided under each tent prior to your arrival. The tent rental does not include admission to the festival.

The event begins at 11 AM with the lineup as follows: The Carolina Breakers, The Holiday Band, Jim Quick and Coastline, The Embers, and ending the night with the musical sensation and vibes of The Tams.

Roanoke Island is such a unique venue on the Outer Banks, offering a 27-acre island located just off of Downtown Manteo. Like on any island, parking will be very limited. All festival parking will be located at Manteo High School parking lot. The festival is offering a shuttle service all day and will run every 15 minutes to and from each location. Shuttles will begin around 11:00 AM, as this is the time of the gates opening.

There is no outside food or beverage allowed into the venue, but thankfully The Shallowbag Shag has some of the tastiest restaurants around serving food all day. Darrell’s, Mulligan’s Raw Bar & Grille, and Basnights Lone Cedar. They will be dishing out everything from fresh local seafood, burgers, chicken, fish tacos, bbq, and top it all off with Big Buck’s Homemade Ice Cream. Vendors will also be available selling beer, wine, water, and an assortment of sodas.

The Carolina Breakers band members include Jerry Shooter, Keith Pollard, Roger Taylor, Larry Chavis, and Pat Carpenter.  Four lead vocalists playing Motown, funk, rhythm and blues, disco, beach, and many other special requests. They received the CBMA Favorite New Artist of 2011 and together have over 10 #1 hits over the past four years.

The Holiday Band members include Doug Neese, Bob Martin, Mike Taylor, Duane Neese, Bill Ward, and Mark Perry. Band formed in 1991 in Burlington, NC and started off only part time for private events. They uniquely blend soul, blues, funk, and Carolina Beach music. From their talent and success the band now plays 175+ dates out of the year from Cincinnati, Ohio to Cozumel, Mexico.

Jim Quick and The Coastline

Band members include Jim Quick, Casey Meyer, Albert Rogers, Glen Tippett, Sam Bryant. Coastline is signed with Atlanta-based label, Landslide Records. They debuted in April 2005 with their song “Sweet N’ Ripe. From there on out their combinations of Carolina back beats, Georgia southern rock, Cajun inspired grooves, to Texas and Delta blues, filled their ears of listeners all over.

Band Members include Charles Pope, Little Redd, Robert Arnold, Reginald Preston, Elton Richardson, Greg Gallashaw all backed by the talented 14 Karat Gold Band. The original Tams began in Atlanta, GA in 1962 with little Tams in training all along the way.  You will be soothed by their Motown vibes, Outer Banks breeze, and warm sunshine all night long. Band member positions have been passed down through generations, and strive to show this is a band that will never die!