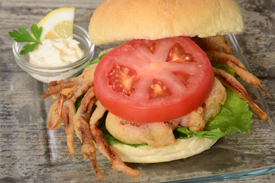 How I Discovered Soft Shell Crab

When I started dating my wife, a local Outer Banks girl, she introduced me to a few things that were special to her about the Outer Banks.  One of those things was crabbing. I had never been crabbing before, and she made it her mission to give me the experience.  I remember going out with chicken necks on a string, catching 10 or so, steaming them up, and being introduced to the wonderful flavor of blue crab.  While I enjoyed myself, I must admit it was a lot of work to get to the meat.  But to this day my wife doesn’t seem to mind the work to get to the meat.  She loves blue crab.

A couple of month before we were married she wanted to introduce me to another Outer Banks experience, soft shell crab.  She grew up with neighbors who, every spring, were soft shell crab harvesters.  I learned about the process and helped out for an afternoon; as a reward we were given a few to enjoy for dinner. You don’t eat soft shell crab the same way you would hard shell.  They were deep fried whole, missing a few internal parts, and put on a sandwich.  At first I was rather hesitant.  I mean, it looked strange to me and I was expecting it to be hard, but I was pleasantly surprised.  The flavor was kind of like the difference between chicken and fried chicken, but blue crab is so much better!

That was 6 years ago.  Shortly after getting married I stole my wife away to Florida and there we had to make do with frozen snow crab, which wasn’t even close to the same.  Now that we’re back on the Outer Banks, one of the first things my wife wanted to do was to go crabbing.  And recently I’ve reconnected with my wife’s childhood neighbors and reacquainted myself with the soft shell crab industry and I thought I’d share some of what I learned. 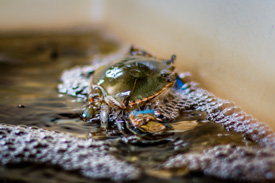 How do commercial fishers know Soft Shell Crab season has started?
In a normal year the season will start somewhere in late April, early May.

Some people will take a net and drag it to see if they catch any “peelers” (a peeler is a crab that has left or is leaving its shell), but what most people do is they set an empty peeler pot and see if one goes into it.  A crab will usually go in for protection. When they’re soft they become vulnerable. But people do it in different ways. 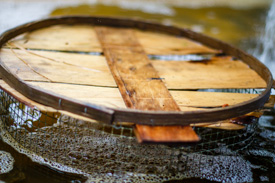 How can a consumer know it’s Soft Shell Crab season?
Visiting your local seafood market often is the best way.  Many say that soft shell crab season starts around the same time as strawberry season (strawberry patches near the area where the crabbing takes place); how accurate that is I don’t know. We do know that the crabs will shed the most around the full moon.

Why are the crabs getting soft?
They’re shedding their hard shell in order to grow.  When they get out of their shell they are already larger.  And within hours they are hard again and bigger. 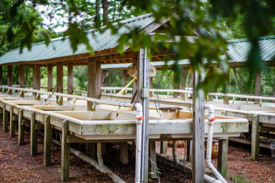 What is the strategy in catching the crabs?
When catching hard shell crab you can use chicken or fish in the pot, but when you’re going for soft shell crab you use a “Jimmy” crab. A Jimmy is a male crab.  Crabs mate during soft shell season and placing a large male in the pot will draw in the other crabs.

Once the crabs are caught what is the sorting process?  Where do they go from the crab pot?
You have to identify how close the crab is to shedding.

If you look at the back fin on a crab you’ll see a red line.  The redder that line the faster that crab will shed.  A strong red line means they will most likely shed that day.  If the line is closer to pink then it might be 2 to 4 days before they shed.  And then there is what’s called a “white line peeler”.  That crab is going to peel, but it’s going to be a while.  Also, females are usually a week or two behind the males. 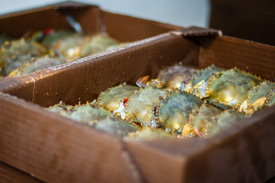 Once the soft have been separated from the hard, how do you know when the soft shell crab is ready to be packaged?
Once they’re soft crabs, they immediately start to harden up. The warmer the water the faster the firm up. You can eat them right away if they’ve turned soft, but if they’re going to be sold then you need to let them harden slightly.

Once the crab is ready it is placed in a cooler until it is cooked.  If the crab is too hard it’s no longer good for cooking through soft shell methods.  If the crab is too soft then it can’t resist the cold of the cooler and it will die.  You can eat a crab that has died, but they don’t taste as good.  Soft shell crabs are sold year around, but those are dead crabs.  The best are those that were cooked while they were still alive.

The lesson here is, if you want to experience the awesome flavor of soft shell crab prepared the way it should be then it needs to be fresh and local.