From Carova to Ocracoke there are beautiful sights to see all along our picturesque beaches of the Outer Banks. But one vision stands out in particular and this vision has people flocking to our northern beaches for a possibility of seeing; the Wild horses of Corolla. They used to roam the Village of Corolla and areas surrounding, but development of Duck and Corolla in the 1980’s brought danger to the horses. From speeding cars, growth in population and treacherous development this was not the place for the horses. 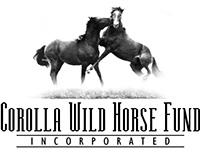 Local non-profit Corolla Wild Horse Fund and supporting causes gave the Wild horses protective status. It took Corolla Wild Horse Fund nearly 6 years to get permission and funds to build a sound-to-sea fence and a cattle guard on the paved road. The horses were moved to the Outer Banks’ northern beach called Carova. This is one of the most remote and undeveloped parts of the Outer Banks.

In the 1990’s the Corolla Wild Horse Fund put together a management plan to help protect and conserve the wild horses. At the beginning, the target population was meant to be between 120 and 130, and to never drop less than 110. After the horses were moved north, in 1997 the management plan changed to a population of 60 for managing for extinction.

The history of how the horses arrived on our beaches has many theories. While not confirmed, there are two main theories that most scholars hold to be most accurate.  They are the explorations of Lucas Vasquez de Allyon and the exploration of Richard Greenville. 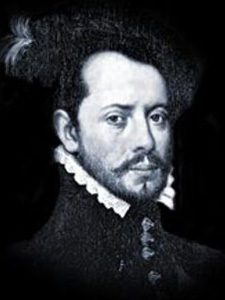 Lucas Vasquez de Allyon was a Spanish explorer who received a charter from the Spanish King that gave him the right to explore and colonize majority of the Eastern coast. The Spaniards began taking Indian children as slaves and sending them to the West Indies. As you can imagine, the Spanish explorers ran into great trouble with the Indians and were forced to flee to Florida. Fleeing in the manner they were required to, they left behind all their livestock. Thus being how the wild horses arrived.

Another theory giving detail of the livestock on the Outer Banks is by Richard Greenville’s explorations directed by Sir Walter Raleigh. They followed the same route in the spring of 1584-1587 that took them to the Canary Islands and across the Atlantic, stopping in the West Indies. Spain and England were at a state of war during these years, but trading still occurred between Spanish colonists of West Indies, and Greenville’s ships. 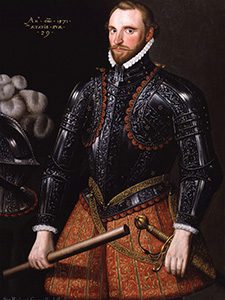 Eventually the Spaniards invited Greenville and company onshore for feasting, bullfight, sports and more. Here is where Greenville purchased items for the colony such as: horses, cows, sugar, ginger, tobacco, etc. Greenville set off on travels and spotted the American mainland. While bringing the ship into harbor, the worst occurred. The boat was beached. This was detrimental to the colony as most of the supplies were destroyed and/or severely damaged by salt water. It’s led to believe the livestock was lost or swam ashore.

These theories reflect present day facts. The Wild Horses of Corolla carry distinct features of Spanish horses. One particular resemblance is the number of vertebra; they have one less vertebra than most breeds. On top of that they have a mellow and level temperament, high endurance, their size, and astonishing beauty.  These facts point in the direction of Spanish decent and their traumatic history.

It’s very important we all practice safety for the wild horses and ourselves. The key word is wild. As beautiful and graceful as these horses are, they are still wild horses. We shouldn’t attempt to pet them, approach them, or chase them by any means. The Wild Spanish Mustangs are meant to be admired from a distance in all their beauty. It’s important we maintain respect and share our beaches with them as they politely share with us.